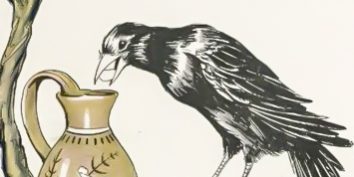 One of Aesop’s fabled … umm … fables was The Crow and The Pitcher. Summarised, a crow dying from thirst finds a pitcher with just a little water in it.  But sadly, the crow can’t get his head far enough into the pitcher to get to the water.

If managing, training or coaching the crow, the likely response of some leaders will be to encourage the crow, to highlight where the crow is going wrong or to point out that other animals, like the snake, are more than able to access the water.  “What’s your problem?  Try harder, you stupid crow!  You’re gonna die!!”

In circumstances where learning and mastery aren’t happening, a good leader of learning would not focus on the failings of the crow, but on changing the conditions in which his crowness isn’t working.

In time, the crow would be able to access the water and its life would be saved.

Your job, as a leader of learning, isn’t always to focus on what your people can’t do or to merely hold them accountable for doing better.

It’s about walking with them while they collect pebbles and make progress.

It’s about building contexts where access to learning and success are more likely.