Last week, I had the chance to share the stage with the incredible Dan Gregory (of “The Gruen Transfer” fame) at the Future Of Leadership Conferences in Brisbane and Sydney.

Dan is one of those almost intimidatingly clever people who says it like it is (or even more bluntly than it really is!) and he told two stories about designing for success that I thought were pertinent to the many schools out there tackling school reviews and 2018 strategic planning right now 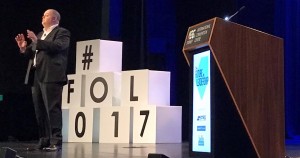 Firstly, Dan spoke to the relationship we have with our alarm clocks and how many of us need to set multiple alarms in the morning for we know that our own discipline and willpower are insufficient to get up and run/walk on a cold morning. Dan says this isn’t a willpower problem, but a design problem. Those who merely put their alarm clock on the other side of the room are far more likely to get up, due to needing to get up and turn it off.

Then Dan talked to a US Air Force plane that encountered a severely damaged wing midflight. After returning safely to ground, the pilot reported that his role in the miraculous outcome felt quite minimal. He said “The plane simply refused to crash”. You see, the plane designers had thought about this type of unexpected problem and had prepared the rest of the plane to cope with it.

As you set about assigning targets and implementing programs for 2018, you’ll need to do better than goal setting, scheduling and training to succeed. You need to imagine failure and what could go wrong in the uniquely human system that is a school.

Could coaching, dialogue, mentoring and modeling be the missing pieces in your journey and also work as the features that will mean a successful design above a doomed intention?